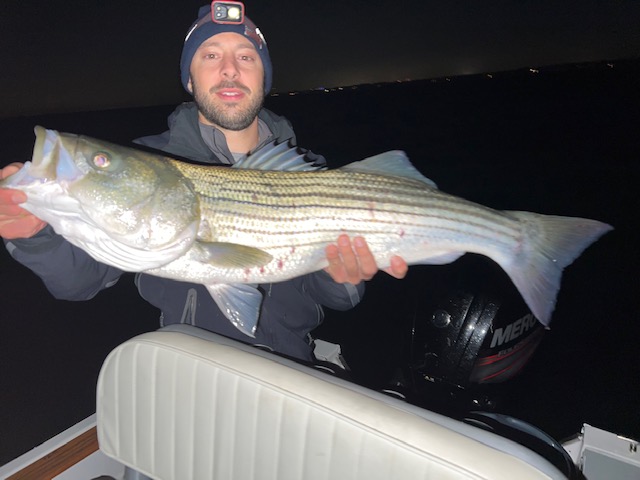 The fall season ended pretty well. We had a ton of bunker stick around into October and beyond, which is pretty typical. What wasn’t so typical was that we had big blues on them, sometimes right in the harbors. It was a lot of fun. There were also nice bass on them at times*. Sometimes that window for bass was really small, where bunker were sticking around all day but they would only get attacked for a limited amount of time. These were patterns that held true for awhile…until they didn’t. That’s fishing, the only constant is change. Also worth noting was a pretty darn good jigging bite for blues on the reefs..

Even when bunker weren’t visibily getting eaten or seen at all, lots of nice bass were being caught on bait throughout the coastline. Word got out about this, and it turned into a bit of a slaghterhouse sh**show live bunker fishingsituation. Bummer. As for the bite on artificials, we had a week+ of some awesome night fishing during an unseasonable warm October week. Casting SP Minnows, Bombers and Danny Plugs into shallow, fast current areas was pretty killer. Dozens of fish to 30-40 inches with my pal Carl, and lost some much bigger. Never have I have experienced days when I did not have treble hooks onboard that were strong enought to hold true against these fish… See pic below.

As for the alberts, they were certainly around east of us in September, closer to new haven county. They did come in right around the same time as the blackfish opener (october 10th) and some folks got in on a good bite. It was a fleeting bite, as has been the trend the last few years. They actually did stick around for a few weeks too, but not a ton of sustained, long-lasting feeds.

Blackfishing was pretty typical. I Had one particuarly spectacular day on my vessel where my fiancee got a 9+lber! It pays to fish new areas, as always. Togging isn’t rocket science, find the rocky areas and you will find fish, but the devil’s in the details. Then again, there are some days that drive everyone nuts and fish won’t chew.

The course of fishing in the modern age

Every year I try and reflect on the last season(s), and think about what I want to change. It could be new tactics, expanding my range and trying new areas, or doing more of something I enjoyed in the past. All of these changes are part of the evolution as a fisherman. There are a lot of ways to skin a cat, and there are probably a lot of tactics that haven’t even been discovered yet, or are under-utilized as trends change or they fall out of favor in certain regions.

One trend I have experienced that’s unrelated to fishing tactics is the ‘fishing networking’. I have made more fishing friends on the water since I got my boat, when I knew only a few boats and no fisherman. This is partially a great thing, meeting more people who enjoy the same hobby as I do. Social media has also gotten even faster, and more frequent, with Instagram and ‘live stories’ coming to the forefront of our digital lives. The resulting effect is an influx of information: who’s catching what, and how, and maybe even where. And even on the slowest of days, someone is always catching. Since Covid, there are also a LOT more people fishing. I distinctly remember early spring of 2020 being amazed at how many boats were already out in April and early May, a time when the vast majority of boaters and fishermen aside from the ‘hardcore’, would not be out on the water. All this is to say, fishing seems to have become for some, a very interactive, intelligence sharing, ‘coordinated attack’ type of situations. The result is fisherman checking the latest live reports for updates and to possibly change the course of the ship. Quite frankly I don’t know how the fish populations will sustain these coordinated attacks, but that’s not for me to solve. As you may have caught wind of, there are many conservation policies being considerd by policymakers which I won’t cover. I myself will likely be checking out of the habit of posting my frequent updates on social media aside from a tight crew, and I’m actively trying to take the digital out of the fishing experience as a whole, although it’s not easy.

The season to come

Alright, onto the good stuff. It’s late March, and fish are around the corner. The earliest I’ve gotten them in smaller, ‘non-holdover’ rivers is last week of March (2020). Fishing has been good in the big rivers and the bite has gotten closer to the sound. Some herring have been reported moving into the rivers, although the osprey don’t seem to have arrived based on my observations. The month of January and February the water temperatures were on the lower end compared to monthly averages, and March has leveled out a bit as you all know it’s been very nice early spring weather. In my experience, our fishing locally benefits from a cold winter and early spring, and a quick warm-up in May. Time will tell how this year pans out. Be prepared as last year we had big bass action in late May mid sound, no need to even travel west…

I will post some more intel as good stuff starts to heppen. Until then I’ll be hunting ghosts and making a lot of fruitless casts with cold hands for awhile (based on the most recent forecasts).