Well for a striper fisherman in fairfield county, this is THE time to catch your trophy fish, and we’ve been on fish pretty good for a few weeks now since late May.  Safe to say if you’re putting your time in at the bass hours, i.e. early AM, late in the day, or under the cover of darkness, you have a good chance at hooking up.  We have had some solid waves of migratory fish coming through and stopping in at the islands.  Hopefully some fish find what they’re looking for and stay.  So far the prevalent bait I’ve seen is silversides, some really longer than usual ones up to 5-6 inches.   There have also been peanut bunker around, as they have been all winter.  The usual assortment of topwater poppers, swimmers, soft plastics and flies are doing the trick.  When the fishing has been really good, the fish have been keyed in on these silversides for me personally.  I have yet to see really thick large schools of bunker locally, but supposedly they are definitely in to the west of us, east, and out in the middle where I know guys are live lining.  This weekend’s full moon tides should be one of the best times to fish the whole season.   I’m sad to to say I’ve only put in 3-4 outings this season, so I wholeheartedly plan to make up for that starting tomorrow night.  Of those 4, 3 have brought big fish though.  Fish porn below.  Tight lines! 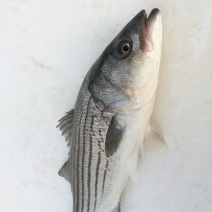 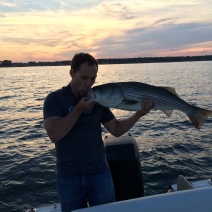